Rats: Night of Terror is a 1984 post-apocalyptic thriller film directed by Bruno Mattei (under the pseudonym Vincent Dawn).

Set 225 years after a nuclear holocaust in 2015, apparently the fault of “scientists”, the survivors are divided between those who live in comfortable underground cities and the "New Primitives" who live in the sunlight. Why these people are dressed like early ‘80s punk rockers, still have fuel for their motorbikes, and have funny names like “Video”, “Taurus” and “Chocolate” is never explained.

A group of eleven Primitives come across a mysterious village. Despite the presence of numerous horribly mutilated corpses, the adventurers decide to settle in town after discovering a large amount of food, a greenhouse with various fruit trees and a reservoir of drinking water. The following night hundreds and hundreds of hungry genetically mutated rats are ready to attack them one by one.

Two summers ago we screened CRUEL JAWS, a Jaws rip-off that stole footage from other shark films which was also directed by Mattei. RATS: NIGHT IF TERROR is his other “masterpiece” and, although all the material is original this time round, it’s even more inept. The terrible script and overacting, shockingly bad wardrobe, and immense stupidity of the human characters all jostle to be the film’s funniest element. Oh, and the dubbing is some of the best worst in cinema.

And then there are the supposedly vicious and terrifying rats that, in reality, couldn’t look more disinterested or non-threatening if they tried, and have to be physically coerced by stagehands to “attack” the actors. In fact, it is rumoured that the vermin army are actually guinea pigs that were painted black! The logic-defying ending, meanwhile, is a must for all bad film lovers. So do join us for this cheesy pre-Halloween treat!

"Over the top gore, laughably bad dialogue, and ludicrous special effects making it quite possibly the funniest movie about giant killer rats ever made" - CD Universe

"This film is a comedy classic, mixing cheap sci-fi with gory horror and a dollop of unintentional stupidity. It's a riot!" - IMDB

Get your Tickets Here 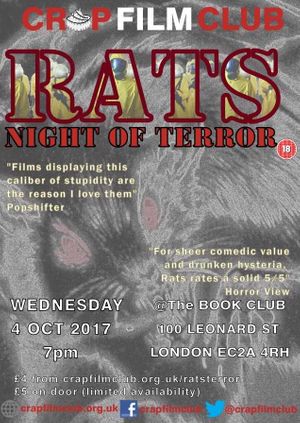