2017 year marks the 50th anniversary of the 1967 Sexual Offences and the Abortion Act, decriminalising abortion and homosexuality in the UK. But still, fifty years on, the struggle against sexist, racist, homophobic and transphobic oppression continues, with some communities bearing more of the brunt than others.

If 2017 thus far has been the year of Trumpist islamophobia and homophobia, and if figures such as Milo Stevens have served to whitewash these racist agendas in the name of queer and trans liberation struggles, VoR ’17 is going to turn that all on its head.

Bringing together LGBTQI+ artists from muslim-majority countries around the world, to showcase musicians and artists whose work expression is both unapologetically Queer and uncompromisingly anti-racist. Think radical and outrageous revolutionaries who struggles are multi-layered and universal: beautiful voices of global and intersectional resistance.  Come see some of the performers in action!

Kat Kai Kol-Kes is an international award winning Trans* ARTivist, writer, performer and author of “...on about the same old things”. She uses storytelling to bridge the divide between academic and activist jargon and real world understandings of queer livelihoods. A 2013 Brand Botswana, Best of Botswana Performance Artist honouree and 2017 TED Global Fellow, her work has been showcased locally in Botswana through her ‘Queer Shorts Showcase Festival’ and internationally as well. Kat is a guide with the Queer Tours of London.

Filip received their MA studies at UAL in 2010 and has attended exchange studies in Choreography Concordia University in Canada. Canha has completed their BA in Performance at Akademi for Scenekunst in Norway in 2007. Filip’s works lay within queer and feminist performance aesthetics. Filip has been exploring notions of genderqueer, non-binary and genderfuck.

Ruchi is a popcorn chomping, sour candy loving, queer student, writer and performer. She writes to battle vulnerability and invisibility and eats them for breakfast too. This ‘Indian girl’ is a fan of slasher films starring herself and her hapless victims - middle-class respectability and chastity. 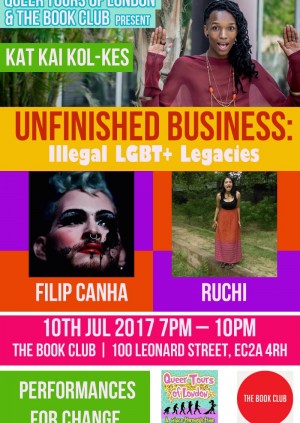