This event has been postponed and will be rescheduled for a later date.

Never Too Young To Die is a 1986 action adventure comedy directed by Gil Bettman. Generally termed a B movie, it stars John Stamos as Lance Stargrove, a high school gymnast who must avenge the death of his estranged secret-agent father (George Lazenby) at the hands of the evil bisexual hermaphrodite Velvet Von Ragner (Gene Simmons). Teaming up with his dad’s former partner, Danja Deering (Vanity), can Stargrove stop Ragner and his army of henchmen from poisoning LA’s entire water supply?

"Never Too Young to Die" burst on the cinematic landscape in 1986, one of the first in a line of unwelcome ideas to spring from the mind of actor/director/writer/producer Steven Paul, who would later go on to write all five entries in the Baby Geniuses franchise. It’s the kind of film that could only exist in the 80s. In addition to the hockey-haired hero, the Casio-heavy soundtrack, and the plucky Asian friend, there are elements of Rocky Horror Picture Show, Gymkata, The A-Team, Mad Max, and James Bond… basically the result of a thinktank comprised of cocaine-fuelled movie executives who have been asked “what do young people like?”. As an example of completely misunderstanding what would grab an audience, it is magnificent.

With Stamos and Vanity taking things way too seriously, it falls to KISS frontman/bassist Gene Simmons (he of the horrible tongue) to be the only person involved who clocks what trash this is and just run with it. Channelling both Tim Curry’s Dr. Frank-N-Furter and The Joker, he takes what could have easily been an offensive and problematic bad guy and makes him/her so over-the-top offensive and problematic it becomes a delightful tour-de-force. AND he has a scary fingernail. There are also blatant stunt dummies, an earworm of a theme song and possibly the stupidest seduction scene ever filmed!

So, join us to commemorate the release of the 25th Bond film “No Time to Die” by experiencing what will surely prove to be a far more unique and memorable movie, and one which has been described as “one of the funniest shit-storms ever made!” (Reel Reviews). We’ll have snacks, competitions, prizes and other assorted crap to enjoy, plus the all-powerful Celluloid Sorceress will be on hand to introduce the film. Remember, you’re never too young (or old) to enjoy a film as good/bad as this so book now!

“A VHS gem of the highest calibre” – Junkfood Reviews

“So inept, so incredibly BONKERS and off the wall that it is probably one of the most insanely fun movies you'll ever see” – Home Theater Shack

“A very, very fun and highly entertaining movie - they truly do NOT make ‘em like this anymore” – Comeuppance Reviews 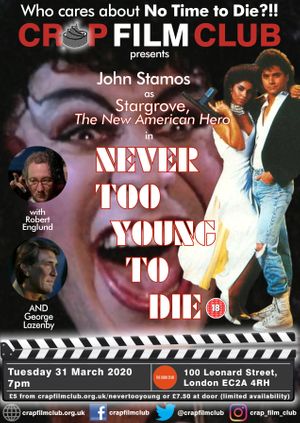