Shade is nothing new on RuPaul's Drag Race but with Baga's mum-bashing last week ("It's really hard to dress a woman of a certain age. She's got a bit of a tum. You know what I mean?") plus Ru's comments around gender - that he would 'probably not' allow trans women on what is becoming an increasingly mainstream, household-name show, well.....we need to talk. Despite what we see on RPDR UK, the UK Drag scene is one of rich variety, celebrating all expressions of gender and identities.

Join trans Afro-Latinx drag performer CHIYO GOMES, Pecs Drag King Star Loose Willis and Drag Queen MYNXIE an exploration of drag in it's myriad of forms as well as addressing some of it's thornier issues.

Stick around because at 8pm we'll be screening the RPDR UK Live Final followed by DRAG DJ FELIX LE FREAK on the decks from 9pm til late!

Loose performs as part of Pecs Drag Kings, an all-female and non-binary theatre and cabaret company who’ve been creating critically acclaimed shows for the LGBTQ+ community since 2013, with sell-out shows at Soho Theatre, the Tate, Southbank Centre, The Glory and The Yard.

**************
CHIYO GOMES is a trans Afro-Latinx drag performer and writer, Prinx of Provocation and Stray Mutt of London’s cabaret scene. You can read Chiyo's article about RuPaul's Drag Race UK in The Independent.

Chiyo is the unorthodox embodiment of Royalty navigating the UK cabaret scene. Their work manages to be sensual, endearing, powerful, and yet professionally executed. Regularly performing alongside platforms like The Cocoa Butter Club, Chiyo also produces their own smut night called “WOOF: Redefining Sexy”. Their work constantly dismantles gate-keeping and unnecessary yet ever-so-present barriers QTPOC face when navigating the “queer” community.

Though preferring the term “Prinx”, Chiyo has been shortlisted for multiple “Best Drag King” awards, awards for originality, and their work has been showcased in exhibitions across Europe.

Committed to his brand of “Redefining Sexy”, Chiyo is a regular guest dancer at London’s first LGBTQIA+ Strip Club, Harpies, and constantly hopping between Queer spaces to Gogo for the late night crowds." 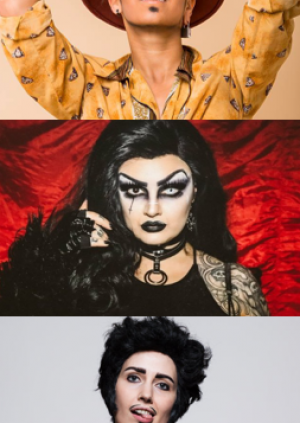