"Best F(r)iends" is a 2017 American dark comedy thriller film starring Tommy Wiseau and Greg Sestero. Written and produced by Sestero in two parts (Volume One and Volume Two), it marks the reunion of Wiseau and Sestero 15 years after making the cult classic "The Room". The plot follows a homeless drifter in Los Angeles who begins working at a morgue, only to realise his boss is hiding a mysterious past.

Sestero plays Jon, a homeless and virtually catatonic veteran in L.A. with nothing but a bloody t-shirt and a bag of lemons to his name. Awakened by the kindness of Harvey, an eccentric mortician (Tommy Wiseau, obviously) who gives him a job. They embark on a get-rich scheme involving boxes of gold teeth taken from dead bodies but distrust and paranoia naturally develop, fueled by Jon's burgeoning romance with a local bartender who has a scheme of her own.

The film is partially based on a road trip where Tommy suspected Greg of attempting to kill him (of course this was not the case). But years later, as he was high on edibles, the thought came to Greg’s mind—what if he was trying to kill Tommy? And so, "Best F(r)iends" was born. Greg had always wondered what would happen if Tommy was given a character written just for him, in a film that wasn’t created by Tommy, hoping to see what Tommy could do in an actual decent film. The result? Well, to use Greg’s own words, it is batshit crazy!

Can you capture lighting in a bottle... twice? With Tommy Wiseau it seems anything is possible. So join us as we return in style with the film which brings the disaster-ly duo back onto the screen. Thankfully it doesn't attempt to commit that worst of crimes - being bad on purpose - but still manages to be unwittingly hilarious anyway. In fact it "could be the film you never knew you needed" (Vanity Fair). We'll also have an exclusive video intro from Greg Sestero, as well as offering a few lucky punters the opportunity to win a prize in our crappy competition, so let's all be f(r)iends!

"If you want an entirely unique viewing experience which will make you laugh at the poor/legendary acting and scratch your head with bewilderment, this is the film." - IMDB

"The oddball pairing are back with another doozy of a movie best shared with good friends and maybe a drink or two (dozen)." - Film Threat

"Thanks to Wiseau’s off-beat acting style, there is a lot of humor, both intended and not." - Geeks of Doom

"Easily the funniest film I’ve seen this year...it delivers in all aspects." - Sarah Saw a Movie

"A remarkably fitting pedestal for one of the strangest performers of our time." - Birth, Movies, Death 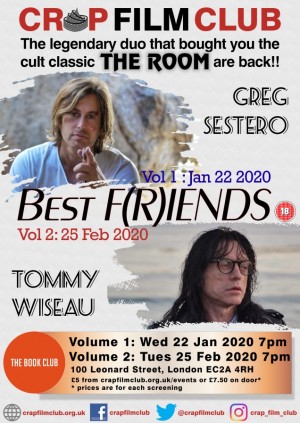