"The biggest spoken word night in London for women" (Evening Standard) that was called "feminism at its ruthless best" by Blouinart returns to The Book Club in Shoreditch.

Shortlisted for Best Spoken Word Night in the UK (Saboteur Awards), That's What She Said showcases the best new writing and performance by women and non-binary writers, featuring iconic and emerging authors with a mix of performance, poetry, storytelling, slam and more.

⭐ TINA SEDERHOLM ⭐
Tina Sederholm (@tina_sederholm) is a poet and theatre-maker. She managed to avoid being a poet for the first thirty years of her life by focusing on being an International Event Rider, but her love affair with words has always been a constant, and since turning her attentions to poetry she has written and performed four solo shows, including six runs at the Edinburgh Fringe, written six books, the latest being Everything Wrong With is Beautiful, published by Burning Eye, and won more than 20 slams. She is currently touring her latest show, also called Everything Wrong With is Beautiful.
’Stunning’ ***** Three Weeks
‘Completely spellbinding’ ***** Edfringe Review

Sylvia Arthur (@libreriagh) is a British-Ghanaian narrative nonfiction writer whose work explores issues of identity, diaspora, politics, and place. Her writing has been published in The Guardian, the BBC, and The British Journalism Review and her essay, “Britain’s Invisible Black Middle Class” appears in the anthology, Know Your Place: Essays by the Working Class for the Working Class. She has been awarded fellowships to Hedgebrook and Santa Fe Art Institute and received a grant from The Andy Warhol Foundation via 516 Arts to produce a publication on immigration and art produced in and about the US-Mexico border region. Her short play, Haze, had a six-night run at The Vaults theatre in London and her one-woman show, Obama & Me, was performed in London, Brussels, and San Francisco to a sold-out audience. She holds an MA in Narrative Nonfiction Writing and is a passionate literacy advocate for those from marginalised and disadvantaged communities. She lives in Accra, Ghana, where she has turned her vast collection of books into a lending library, Libreria Ghana.

Imogen Stirling (@imogen_stirling) is a Glasgow-based performance poet, theatre maker and musician. Imogen is currently touring her five star sell out debut show #Hypocrisy, was longlisted for the Amnesty International Freedom of Expression Award, and was selected as ‘Best of the Fest’ by London’s Theatre503. The script was published by Speculative Books in March 2019 and the show shortlisted for 'Best Spoken Word Show' in the Saboteur Awards 2019. Imogen was selected to participant in the BBC Words First talent development scheme. Her new show Love The Sinner premiered with Dundee Rep Theatre in early 2019, after being selected for showcase within the Rep Stripped festival. Imogen also works as Project Officer for award-winning independent publisher, 404 Ink.


Open mic walk ups on the evening are welcomed but with limited places it might be advisable to email paul@forbookssake.net if you have a burning desire to speak out and speak up.

"Not only is That's What She Said a great place to see talented literary performers, for everyone and not just women, but it provides a space for women to shout and scream their anger, their frustrations, their desires; a space without censorship, without objectification and without the dreaded “it must be her time of the month” quip. I think For Books’ Sake is doing some really important work." (Thanks SexyVeg for this recent review of one of our London shows! 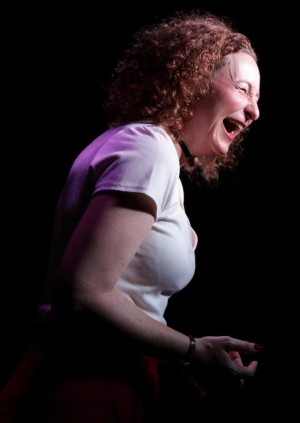