Join us for the opening night of one of the most instagrammable installations in London, False Advertising by Al Murphy. Expect cocktails, DJs and dancing!

‘False Advertising’ is an upcoming solo show by the artist Al Murphy, his first since 2013’s ‘No Offence’ in Los Angeles. In ‘False Advertising’ the Book Club will become a giant billboard and multi-dimensional sensory overload experience designed to thrill and confuse customers while they attempt to eat their brunch.

As a commercial artist, Al has had a long and complicated, on-off, love/hate relationship with the world of advertising. On the one hand it has fed and clothed his family and led to award winning success, while on the other, it has led him to question his own morals as he takes the money to help sell brain-melting products to children. This ongoing conflict will be at the core of ‘False Advertising’.

Originally intended to be a clever comment upon the propaganda advertising deals to an insecure public, he quickly realised that practically every artist from Warhol to Banksy had successfully covered this subject in its entirety. Instead, he is taking the opportunity to transform the space into a gallery of imaginary artwork advertising imaginary products produced by imaginary clients, showcasing his trademark typography, crude illustration, crass humour and self-aggrandising in the process. Ducks too. He’ll draw some ducks because he likes drawing ducks.

The end result aims to provide the viewer with a celebratory experience - one that doesn’t make them want to buy dietary products, but have another drink and get that extra side of cheesy chips they’d decided against.

Al Murphy - once described as ‘the Ipswich Town FC of illustration’ (he’s been around for a long time but it’s hard to recall any of his major successes) - has been an illustrator for almost twenty years. He studied Graphic Art and screen printing at the Liverpool School of Art before moving to London where he established himself as an illustrator known for his use of humour through art.

Over the course of his career, Al’s work has been exhibited in Berlin, New York, LA and London and he has lent his designs to everything from music videos, children’s books, clothing and award winning campaigns for clients including the BBC, Air France, Coca Cola, MTV, Perrier, Newsweek, Bloomberg Businessweek, The Guardian, New York Magazine, Volkswagen, Ford and Paramount alongside many others with questionable ethics which he doesn’t add to these lists, like a politician who’s invested in dodgy overseas ventures and is subsequently selective with the truth.

Price: FREE
RSVP at the free ticket link to grab your spot. 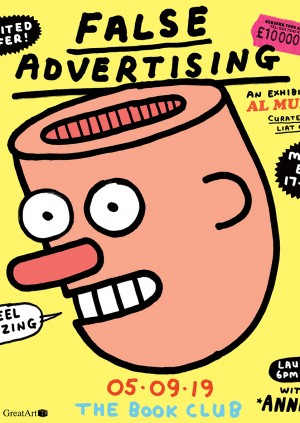