We’ve mulled it over… it’s time for the Second Annual Pundemonium! Grand Final at Hoxton Square Bar and Kitchen!

Got appundecitis? We hope you’re not feeling Santa Claustrophobic!

Running since 2016, Pundemonium! LIVE is hilarious cult comedy game show, full of punishing linguistic challenges by Rachel Mars and Daniel Pitt, designed to put your (egg)noggin to the test.

Guest pundits including performers, comedians, poets and writers to compete alongside members of the public for the coveted ‘Thesaurus Rex’ trophy.

The winners of each heat (this year in London's The Book Club and Roundhouse, Bristol's The Wardrobe Theatre, and Cheltenham Literature Festival) return in the December Final - sure to be literally, factually, the funniest event of the year anywhere in the UK.

Trust us, it’ll be a cracker and Yule love it. No-el kidding. 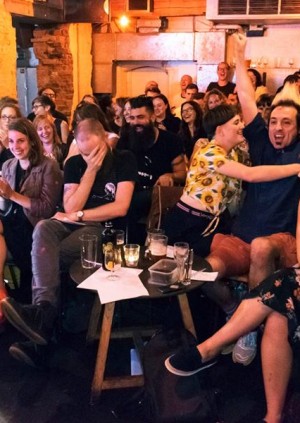