Superculture Presents: A "fast-moving, multi-dimensional action romance", GETEVEN (aka "Road to Revenge", aka "Champagne & Bullets") is the passion project and singular vision of LA-based attorney and struggling actor John De Hart, a man who very much belongs in the same category of egomaniac as Tommy Wiseau and Neil Breen. As well as writing, producing, directing and starring in this, his only film to date, De Hart also fully financed it, wrote the soundtrack AND cast Pamela Bryant (Playboy Playmate of April 1978) as his love interest. Because he could. Do we have your attention? Then read on!

Primarily filmed in 1993 but not released until 2007, "GetEven" also features respected actors William Smith ("Every Which Way You Can", "Conan the Barbarian") and Wings Hauser (who takes onscreen inebriation to the next level and beyond). The "plot" goes something like this: Detectives Huck Finney (Hauser) and Rick Bode (De Hart) are kicked off the force after their senior officer Lieutenant Normad (Smith) blames the pair for a botched drugs bust. Some time later Bode is working as a limo driver and Finney has become a bitter drunk. We follow them through the minutiae of their lives, eventually seeing Bode marry his sweetheart Cindy (Bryant) and Finney set up for another crime. Normad has become a judge, but both Bode and Finney suspect him of dealing drugs. Cindy then sees a picture of Normad and recognises him as the leader of a satanic, baby-sacrificing cult from which she recently escaped...

That's about as lucid as we can make it. As with many of the best worst films, this is not a straightforward, properly thought-out exercise but something that just about hangs together as a film. It has a beginning and an end and a bunch of stuff that happens in-between, none of which qualifies as character development or plot progression. But what stuff! Awkward action scenes, shaky Shakespeare soliloquies, fist-bitingly bad sex scenes between De Hart and Bryant (to the sound of the main man crooning his own love ballads), a man marrying his beloved in '90s casual wear, and the lost line-dancing, country rock classic that is "The Shimmy Slide". You have to see it to believe it, so grab your cowboy hat, comb your mustache and join us this July!

"I adore this film; every cruddy, obvious, plodding, shoddy inch of it." - IMDB

"I implore you, I urge you, I ORDER YOU to take 90 minutes out of your day to experience “GETEVEN” - Movie Boozer

"GETEVEN seems to exist in its own universe, one with no concept of time, space, fashion, or the rules of dramatic storytelling." - Daily Grindhouse

"In this movie, things just randomly happen, with weird cuts and no explanations. And there’s line dancing." - Comeuppance Reviews

"This isn’t merely a bad movie that got made, it escaped! But where exactly did it escape from?" - Cinemasochism 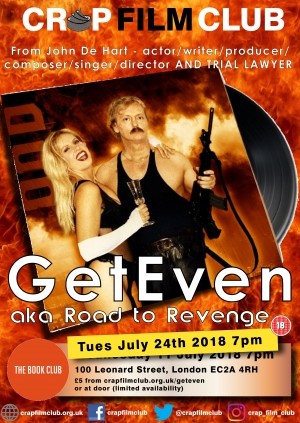